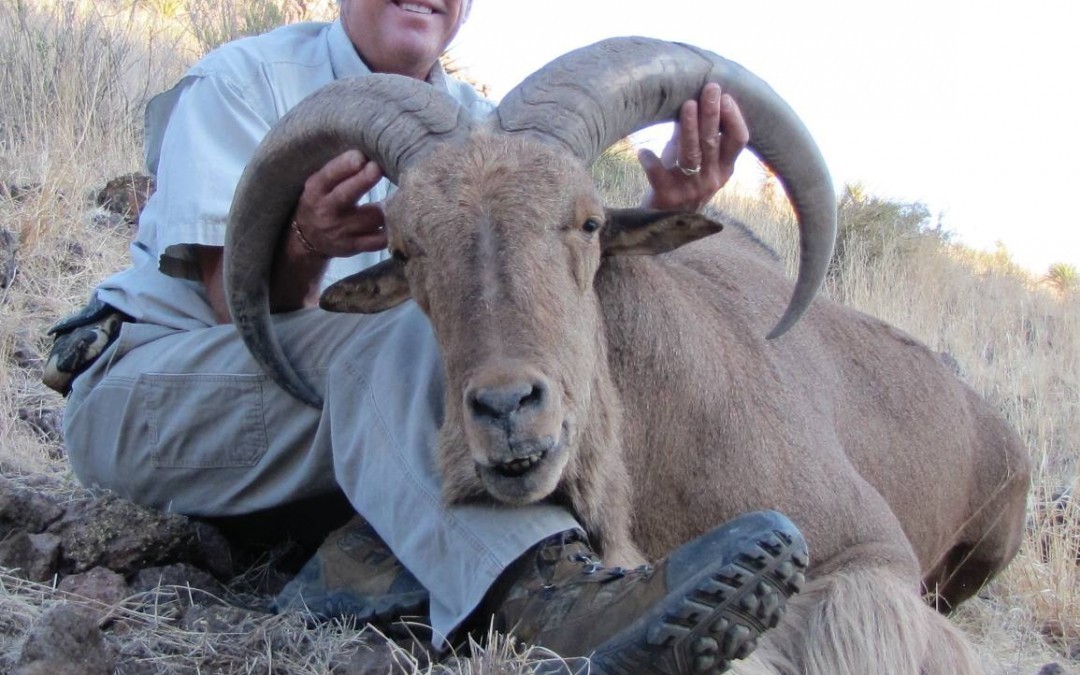 Like most hunters here in TX I always look forward to October but unlike most hunters here in Texas it’s not because of the start of Whitetail season.  For me, October is when I typically goPronghorn and Aoudad hunting out in West TX.  Unfortunately the West Texas population of pronghorn is being decimated by a blood worm and on a lot of ranches, mine included, there’s no longer a huntable population of pronghorn.  It looks like my pronghorn hunts will be moving up around Dalhart, TX, in the Panhandle,  but more on that in another blog.

Free range aoudad hunting is always a challenge, but they are probably my most fun hunts.  I love the mountains of West Texas and I feel very fortunate to be able to hunt 50 sections between Ft. Davis and Valentine.  I’ve been aoudad hunting this ranch for about 7 years and have taken some great free range aoudad over the years and this year was no exception.

Because the terrain is so rough and rugged we hunt aoudad out of a 4 seat dune buggy.  Once we locate the aoudad we get as close as possible with the dune buggy and then the hunt begins.  Aoudad have great eyesight and with the sparse terrain it’s quite a challenge to get close enough for a shot, but that only adds to the excitement of the hunt.

Here’s Brutus in the dune buggy… 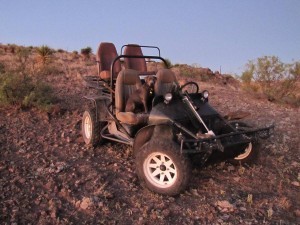 Aoudad Hunting – Are we gonna get lucky on Day 1?

Bill arrived the 1st week of October and the hunt was on.  Having hunted this ranch for 7 years I had a pretty good idea where to start so we loaded up dune buggy and headed into the mountains.  Late in the afternoon I spotted some aoudad about a mile away.  Daylight was fading fast and we had to come off the mountain we were on and get to the top of the mountain the aoudad were on, and we had to do it quickly.  We made it to the top of mountain and got into position for a shot, but we couldn’t get any closer than 450 yards.  After making several moves to get closer we just couldn’t get any closer and had to take a shot.  Bill picked out the biggest aoudad and fired and you could tell he was hit, but he didn’t go down.  Aoudad are very tough and after having to chase one last year I knew I didn’t want to have to do that again, so I was trying to get into position for a follow up shot.  With aoudad running all over the mountain it was tough to find the one that was wounded, but I was lucky enough to locate him as he stood broadside 510 yards away.  I layed down and got a good rest on some rocks and fired.  He took 3 jumps and fell over!

We had a big aoudad ram down on the first day of the hunt…. 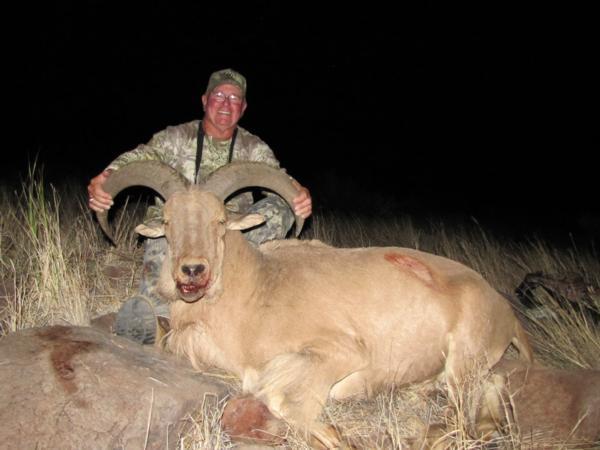 Now the hard part began.  We had to cape an aoudad in the dark on the side of the mountain and to make matters worse I got the dune buggy stuck at the bottom of a ravine trying to get closer to the aoudad.  Caping the aoudad was the easy part. Digging the dune buggy out, not so much.  I ended up hiking back to the house and driving my truck back to get Bill and Ruben, my buddy that came out to help with the hunt, and his aoudad and leaving the dune buggy on the mountain for the night.  The next day Bill headed home with his aoudad, Ruben headed back to NM and William, the ranch foreman, and I went back and got the dune buggy.  Just another day on a ranch out in West TX.

A few days later, Ron and Lori Kutter flew in to start their aoudad hunt.  After sighting Ron’s rifle in at 300 yards we were back in the dune buggy and heading into the mountains to search for more aoudad.  Luck was on our side again and I spotted a small aoudad horn about a mile away and we were off.

We got as close as we could and climbed up on some rocks to take a better look…. 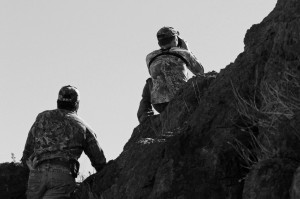 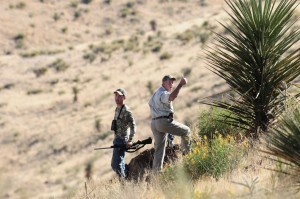 The aoudad finally moved over the top of the ridge and gave us the opportunity to get a closer shot…hopefully.  When we got to  where the aoudad had been I noticed there was another herd coming up the valley, aoudad rut in October and get in big herds,   and now we had almost 100 aoudad all together with 3 huge rams to choose from.  Once the herds came together the 3 big rams began to fight with each other and the sound of them butting heads could be heard echoing all over the valley. 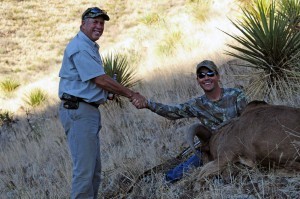 The rams finally separated enough for a clear shot and Ron did the rest.  This picture is awesome and says it all!!

With another big ram on the ground it was time for the hard work to begin.  Ron, Lori and Ruben (he was kind enough to come back and help with another hunt) began the hike down to his aoudad and I went back to get the dune buggy and met them at the aoudad.

I’m not sure if he’s happy about his aoudad or the fact I brought him a cold beer.?.? 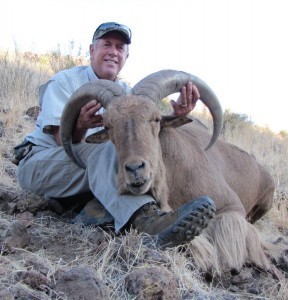 I can’t thank Ruben Ramos enough for coming out to help with these aoudad hunts.  Ruben is a custom knife maker from Jal, NM and a great friend.  I’ve used a lot of knifes over the years, but Ruben makes the best knifes I’ve ever had in my hands.  Check out his website here.

Ruben is not only a great knife maker, he’s a great pack mule too!!! 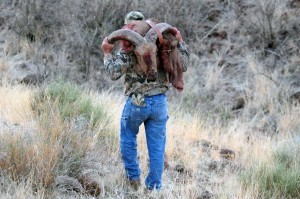 This time I didn’t get the dune buggy stuck, so we made it back to the ranch house just after dark where I fired up the grill and we had ribeyes  and grilled asparagus.  It was a great end to another great hunt.

I really want to thank Bill, Ron, Lori, and especially Ruben for once again making my these free range aoudad hunts very enjoyable and memorable.  I couldn’t have done it without y’all.

I typically go on my West Texas Free Range Aoudad hunting trips in October to coincide with the rut.  It’s a lot easier to find a herd of 50-100 aoudad on 32,000 acres than it is to find 2-3 lone aoudad rams.  Aoudad are an exotic though, and can be hunted year around.  If you plan on go on a free range aoudad hunting trip, make sure you have a very comfortable pair of boots and are comfortable shooting 400-500 yards.  These hunts are a lot of fun and I can’t wait to get back out to West Texas.

So who wants to go on an aoudad hunting trip with me??