Aoudad Hunts in Texas and Double Diamond Outfitters on TV 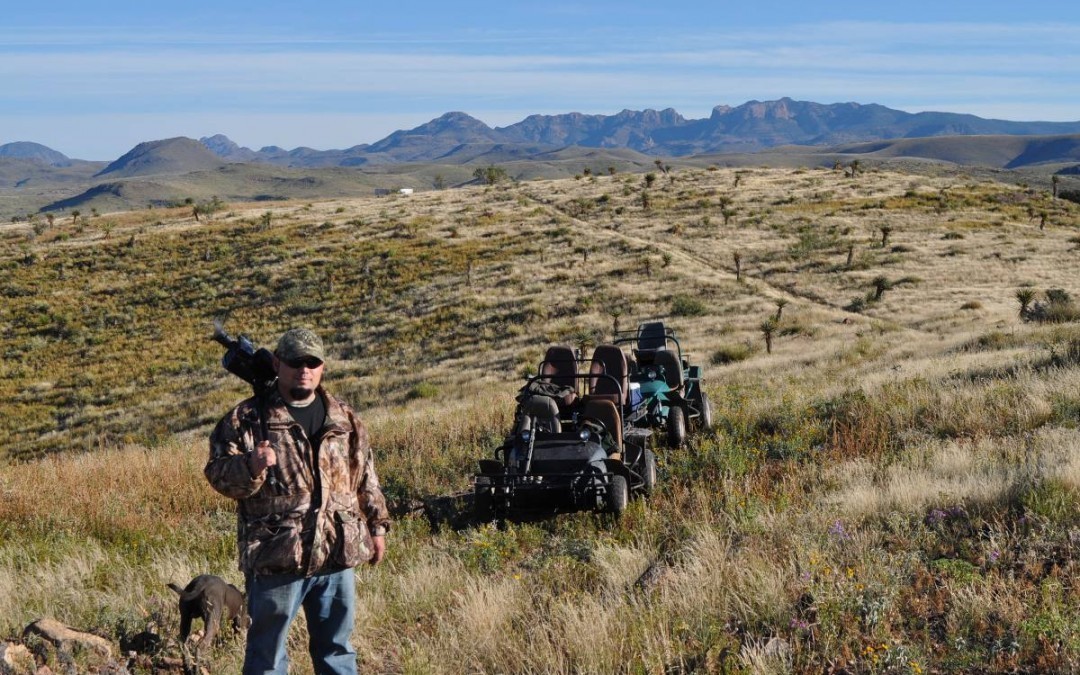 Aoudad Hunts in Texas and Double Diamond Outfitters on TV

I’ve been wanting to do a television hunting show for several years and I got that opportunity with Lonestar Outdoors TV and Brandon Rhyder last October.  We arranged to film a free-range aoudad hunt in Texas, West Texas to be exact.  With Brandon having a concert on Saturday night, and not being able to get to West Texas until Sunday afternoon, and needing to leave on Thursday for a concert on Friday I knew I was going to have my work cut out for me.

As I headed West I was excited to get back to the mountains of West Texas and start hunting aoudad.  Aoudad hunts in Texas can be fairly challenging and when you add in trying to get two aoudad down, on film, in 3-1/2 days I knew I was going to need some help and recruited Craig Ellwanger, with AllAboutExotics.com, and knife maker extraordinaire Ruben Ramos, Ramos Knives.  We met at the ranch, unloaded all of our hunting gear, and got ready for the LSO crew to arrive and the hunt to begin.

Sunday afternoon Clint Whidden (LSO), Brandon Rhyder and Vincent Hernandez (camera man) arrived and with everyone eager to get the hunt started it didn’t take us long to get everyone unpacked.  After getting all of their gear unloaded we headed over to the rifle range to check the zero on the rifles and then we were off in the dune buggies heading into the mountains in search of aoudad.

We spotted our first heard of aoudad on top of a mountain at the end of the valley we were in.  The only problem was that they had the high ground and there was no way for us to get to them without crossing a big flat and being seen.  I was hoping that since we were well over 1000 yards away from them they wouldn’t spook, but I was wrong.  We parked the buggies in a ravine and as we began the hike up the mountain I notice the aoudad were no where to be found, but I figured once we got to the top of the mountain we could find them again….or at least that’s what I was hoping.

As I got to the top of the mountain I couldn’t locate the herd of aoudad we had seen from the valley, but while I was glassing the mountain I heard some aoudad down below me.  A lot of people don’t think aoudad make noise, but once you hear them you will realize that they make such a distinct noise that you won’t ever forget.  As I crept to the edge of the mountain I saw another herd of about 40-50 aoudad with a couple of real nice rams, so I headed back down the mountain to get everyone and see if we could get a shot.  We had a little shade that allowed us to all get into position to see the herd and pick out the ram we wanted to try and take, but we didn’t have a solid rest.  The aoudad were about 400 yards away and a solid rest was a must.  Brandon and I needed to get into a better position for the shot, but I knew we wouldn’t have long once we got out in the open.  Unfortunately we couldn’t get into position before they spotted us and spooked.  I tried to relocate them, but the entire herd of aoudad just disappeared which is something aoudad are great at, by the way.

The next morning we jumped in the dune buggies and heading into the mountains as the sun was coming up. Aoudad hunts in Texas start early, but seeing the sunrise in the West Texas mountains makes up for that. At the very first place we stopped to glass I located another herd of 40-50 aoudad.  We were well over 1500 yards away so we planned to drive down into the valley and up a road to the top of an adjacent mountain.  Once again I was wrong in thinking that the aoudad wouldn’t spook because we were so far away and by the time we got to the top of the mountain they had disappeared. 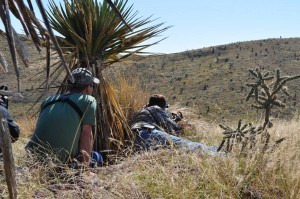 We dropped back into the valley where we located the herd of aoudad the day before stopping to glass the mountains every so often.  After several miles and several stops we finally located the herd of aoudad going over a saddle and this time I knew where they were headed.  We jumped back in the dune buggies and headed around the base of the mountains.  As we circled around the base of the mountain we spotted the herd of aoudad settling down in the shade just below the ridge of the mountain.  From where they were bedded they had a great vantage point, the wind was coming over the top of the mountain keeping them cool and allowing their ears and noses to keep them safe from anything sneaking up behind them and they were in the shade for the next few hours.  As long as we could get to the top of the adjacent mountain before the sun got high enough to get them out of their bed I knew we could get a shot.  We would be shooting across a valley, and it would be over 400 yards, but as long as we got a solid rest it was definitely a doable shot.

We headed up the adjacent mountain and just before we crested the mountain I snuck to the top and located the aoudad.  They were napping in the shade and as the big rams dozed off their heads bobbed up and down under the weight of their huge horns.  Their heads bobbed so much that they would almost fall off the rocks and out of their beds.  It was really neat to watch, but we needed to get into position.  We skirted the top of the mountain working into position directly across the valley from the aoudad.  There were a couple of yucca that gave us just enough shade to set up for a prone shot and we were far enough away from the aoudad that I thought there was a good chance that the rest of the herd would get up and stand there long enough for us to get a second aoudad, assuming our first shot was on the mark.

Brandon, Vincent and I crawled around the first yucca and started getting ready for the shot.  The aoudad are in those rocks just below the crest of the mountain. 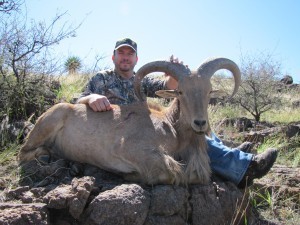 Once we got into position we picked out the aoudad Brandon was going to shoot, made sure the camera was on the same aoudad, and double checked the range at 450 yards.  Now the rest was up to Brandon.  He flicked the safety off, squeezed the trigger and his aoudad never got out of his bed!

When Brandon’s aoudad fell over in his bed the rest of the aoudad stood up and looked at him.  That gave Clint all the time he needed to swap places with Brandon and once behind the rifle he quickly chambered another round and readied for a second shot.  In all of the excitement and confusion it was a little difficult to pick out an aoudad for Clint, get the camera on the same aoudad and have Clint find that aoudad in the scope.  Right as we made it all happen the aoudad started to run over the crest of the mountain and I figured that was it.  Aoudad don’t typically stop once they start running, but this time they paused for one last look back and that was all the extra time Clint needed.  The camera was on his aoudad, he leveled the cross hairs on the top of the ram’s shoulders (the aoudad had run about another 50 yards and were now about 500 yards away) and squeezed the trigger. 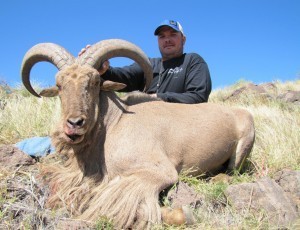 The aoudad didn’t drop, but I was pretty sure I heard the hit through my electronic ear muffs, and as we hiked over the top of the mountain we spotted Clint’s aoudad laying there.  It hadn’t run more than 30 yards and piled up.

After taking pictures the work began caping both aoudad.  Aoudad are big, thick skinned animals, but with Ruben’s help and one of his knives I was able to make fairly quick of caping both of them.  It’s always a big help not having to stop to sharpen your knife and with my Ramos Knife it’s extremely rare that I have to stop while working on an animal to sharpen my knife. 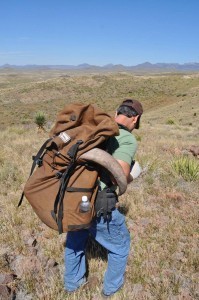 After getting both aoudad off the mountain we all headed back to get cleaned up and start fixing dinner.  It had been a very successful, but tiring, day and it was time to celebrate.  After dinner we got treated to a 3 hour acoustical set by Brandon Rhyder.

What better way to wrap up a very successful hunt than sitting on the back porch, under the West Texas stars and listening to Brandon Rhyder play our own private concert!!

The next morning as we helped Brandon, Clint and Vincent pack up I couldn’t help but think back on what a successful hunt we had.  We got 2 aoudad down within 30 seconds of each other and got both of them on film!  I couldn’t have scripted it any better and never in my wildest dreams did I expect it to turn out like this.

I couldn’t have done it without the help of Ruben Ramos and Craig Ellwanger and a big thank you goes out to them both. 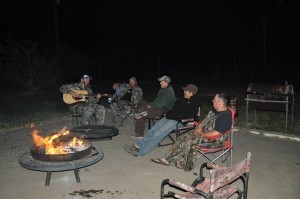 And if you got a taste for an Aoudad Hunt now, click here to get more information!