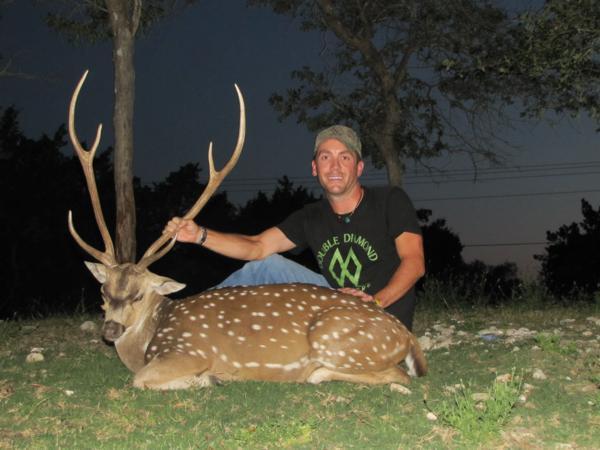 Killing an Axis Deer – check! For as long as I can remember I dreamed of making a living in the outdoor/hunting industry and 6 years ago I decided to chase my dream and started Double Diamond Outfitters.  It’s been a great 6 years and I’ve had the privilege to hunt with great people and kill some great animals, but unfortunately my own personal hunting has been greatly reduced. So I never pass up a chance when I get the opportunity to hunt for myself and kill whatever animal/trophy I choose.

A few weeks ago, I was lucky enough to get an opportunity to hunt axis deer.  I was really excited because I’ve never killed an axis buck.  I’ve shot a lot of axis does, and passed on some great axis bucks, (yes I’m still kicking myself over several of them) so hopefully this time I would finally get my 1st axis buck.

Since I was hunting 15-20 minutes from my house, just outside of Boerne, I decided to concentrate on afternoon hunts when the temperature would continually be dropping.  We had been seeing some pretty nice axis deer at specific feeders, so each afternoon I would concentrate on those feeders, stalking and still hunting, looking for the bigger axis deer that were on my “hit list.”

My first 2 trips I saw a lot of animals, both whitetail and axis deer, but not any of the bigger axis on the hit list.  Despite the heat, it was still a lot of fun to get out and see all of the whitetail in velvet and all the other axis deer.  You almost always see axis deer that are hard antlered, in velvet as well as bucks with no antlers, so there’s rarely a dull moment and it makes for some very fun hunts. 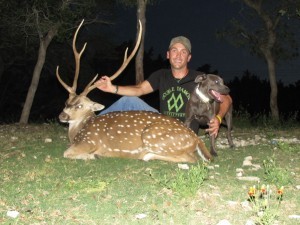 As I drove out for my 3rd hunt, I couldn’t help but think that the 3rd time is the charm, right? Once again the hunt started off a little warm but I was seeing deer right from the start, so I kept telling myself it was just a matter of time until one of the big boys showed up.  As the sun began to set and I stalked up to one of the feeders I saw a big-bodied axis deer moving through the brush and thought I recognized him as one of the bigger axis.  Once he stepped out into the open I immediately recognized the antlers and knew he was one I had been looking for.  After a few short, but tense, minutes waiting for my axis to get clear of the other deer, he finally turned broadside and presented me a perfect shot.  I could tell he was hit hard and watched him run off into the brush and was pretty sure I saw him fall.

Despite thinking I saw him fall I wanted to give him a few minutes just to make sure, so I headed back to my Scrambler to get Brutus, my Lacy dog.  He doesn’t get much blood trailing/tracking this time of year, so I thought this would be a perfect opportunity. I put the GPS collar on him and unloaded him and headed back to where I shot my axis deer, but there was no blood.  I knew I had hit him, but was really surprised there was no blood.  From the way Brutus was acting I knew he could smell him and it didn’t take long for him to find my axis. By the way, if you need a deer tracking dog, let me know, and Brutus and I can help you out!

I was able to get a few pictures and quick measurements before it got completely dark.  He has 30-1/2” and 31-1/2” beams, not bad for my 1st axis in my opinion.   It was a great hunt with some great friends and I would really like to thank Brent, Mandy, Addison, Payden, Karsen, and Reagan for all of their help and hospitality.  I couldn’t have done it without them, so . . . . . thanks a lot guys!  I really appreciate it!  Axis steaks on me . . . .