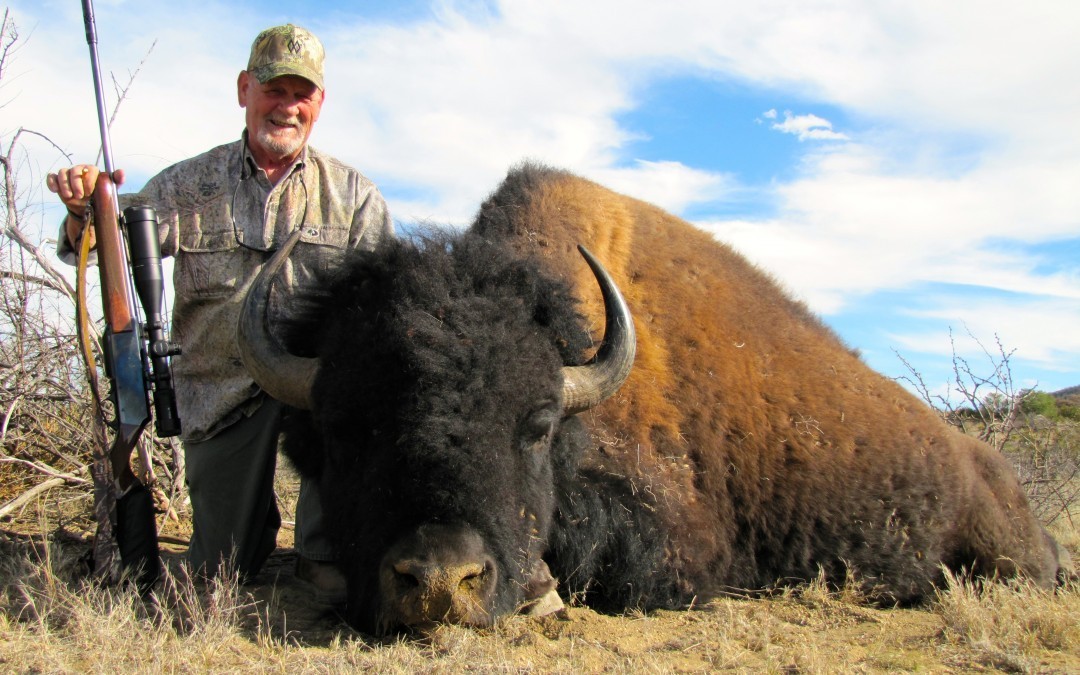 I’m always surprised at peoples reactions when I tell them I’m headed out to West Texas for a Free Range Trophy Bison Hunt.  Most people have no idea that you can even hunt free range bison in Texas, and some people have no idea that you can hunt bison period. And once they see the pictures and see the size of these bison bulls they are even more shocked.  I’ve never seen bison from Yellowstone or any of the other states here in the U.S., so I don’t have much of a comparison, but all I can tell you is I’ve got some HUGE bison bulls out in West Texas!!

When you’re hunting free range bison, it’s not that difficult to get close enough for a shot.  These are huge bulls and they have no real natural predators, so they don’t necessarily try and run or hide from humans.  The difficulty of hunting free range bison is to find them.  West Texas is big country and a 2,000 pound bull can go pretty much wherever he wants.  Fences don’t mean anything to these bulls, not to mention we are typically hunting ranches that are over 12,000 acres.  I was out at the ranch for about 5 days, in January, and never even laid my eyes on any bison.  Not to mention the ranch foreman had been looking for over a month.  They had just disappeared!!

I had to go back out to West Texas in February for an aoudad hunt and I had been staying in touch with the ranch foreman hoping he could locate the bison.  About a week before I was supposed to head west he called me with the good news that he located a couple of big bison bulls. I called Jerry, my hunter, and we made a plan to meet prior to my aoudad hunt.  He lives about 3 hours from the ranch and is retired, so it worked out perfect!

As is pretty typical with me, I was about 4 hours late leaving for West Texas so by the time I got to the ranch it was already dark.  I unloaded all my hunting gear and got settled in for the night.  Off loading my jeep from the trailer and unpacking the rest of my supplies could wait until morning.  Because of my late start I was tired and needed all the rest I could get.  I was going to have to wrestle a 2000+ pound bison tomorrow or the next day…or at least that was the plan and what I was hoping for.

About daylight I was up and off loading my jeep and getting everything unpacked.  While I was unpacking, the ranch foreman drove up and told me he had just driven past the 2 big bison bulls on his way up to meet me.  I knew I couldn’t wrestle one of these huge bison bulls by myself, and had arranged for Buddy to come help out, and while I was wrapping up unpacking he pulled up.  We were both real excited to put our eyes on these bulls, so as soon as he got his gear put away we loaded up in my Jeep in search of the 2 big bulls the ranch foreman had seen earlier.

We drove out through the pasture and after a couple of miles we spotted the 2 bison.  Both were really big bulls, but 1 was an absolute monster!  Now all we needed was for Jerry to show up…. 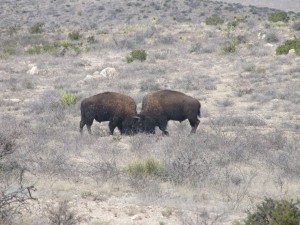 We headed back to the cabin to wait for Jerry, double checked all of our equipment, and made a final plan.  If Jerry got to the ranch early enough we were going to head out to hunt as soon as he got there.  We had the 2 big bison located and I didn’t want to take a chance of them moving off several miles during the afternoon/evening plus it was warming up during the day and I knew it would be better to get the big bull on the ground, get him skinned and let the meat and the hide cool over night.

Jerry was a little ahead of schedule and as soon as he arrive we told him we had 2 big bulls located and it didn’t take him long to get ready for the hunt.  We all loaded up in my Jeep and were off.  We drove back through the pasture to where we had seen them a few hours earlier, but they weren’t there.  Luckily they hadn’t gone very far and after another mile or 2 we had them located again.  Once Jerry saw the bison that was all it took.  He knew as well as I did that the one 1 wanted him to shoot was an absolute monster.

The sun was getting low in the horizon and that made it very difficult for us to see, so we made a big loop around the bulls to get the sun at our back and make the shot a little easier.  Once we got into position all we needed was for the big bison bull to turn broadside and give us a good shot.  These bulls are huge and can be very dangerous when they are wounded and we didn’t want to take any chances.

As the bull began to present a broadside shot, Jerry settled the cross hairs low in the bulls chest right behind his front leg.  When the bull stopped, Jerry made a perfect shot! I knew it was a great shot but we readied for a follow up shot just in case.  A second shot wasn’t necessary and the big bison bull only ran about 20 yards and was down! 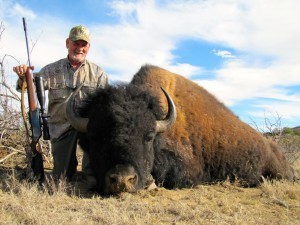 Now the real work started!  Unfortunately my Jeep started acting up, it was some kind of fuel issue, so I had to walk back to the cabin and get my truck.  It took about an hour to get back to the bison and Jerry and Buddy, and by the time I got back from getting my truck Buddy had him partially gutted.  I wanted to get him gutted and in the barn before it got dark and we were running out of time.  As is typical on any hunt, or fishing trip, if the hunt goes off perfectly you are going to have some kind of issue once the animal is down or vice versa.  Little did I know that my Jeep starting to act up was just the beginning.

We got him gutted and on the trailer, but by the time we got to the barn it was dark….and there’s no lights that work in the barn.  I backed the trailer in the barn and we got ready to hoist the big bull up in the air.  The hoist is old and when I read it earlier in the day I thought it said 1 ton.  As we started to hoist the big bison off the trailer we quickly realized it was only a 1/2 ton hoist and not a 1 ton.  We got the back legs off the trailer and got them skinned and removed them from the pelvis.  Then we had to reposition the hoist so we could get the bison higher in the air.  We skinned the ribs and as far down on the shoulders as we could go and them cut the backstraps and tenders out and then cut the rib cage off.  Repositioned the hoist again and began to lift his head and shoulders off the trailer.  That’s when we hit another little snag.  I had unhooked my truck from the trailer to use the headlights as out lights and with nothing holding the front end of the trailer on the ground it would raise up under the remaining weight of the bison carcass and Buddy and I standing on the back end of the trailer.  It was quite the rodeo we had going on in the barn under the headlights of my truck, but we got the big bull all caped and quartered and it wasn’t too terribly late.  The bison had hit the ground at about 3:30 and we were cleaning up and I was getting dinner ready by 9.

As we sat around eating ribeyes and grilled asparagus we discussed the days events and plans for getting all the meat and head and cape to the taxidermist and meat processor in Alpine, TX the next day. We were all pretty tired, as you can only imagine, so it didn’t take long for us to head to bed after we wrapped up dinner….and we all slept very soundly that night!

I always say it’s an experience on every hunt, a new chapter in my book, and this hunt definitely live up to that.  These bison we are hunting out in West TX are huge and if you’re never shot one you’re definitely going to be shocked at how big they are when you walk up and finally put your hands on them.  I’ve seen quite a few of them up close over the years and I’m still amazed!  It’s a great experience, you get an awesome mount and some great meat to fill your freezer.

I really enjoy running my outfitting business and getting to take people hunting for a living and it’s hunts like this that make all the hard work, long hours, and windshield time well worth it.