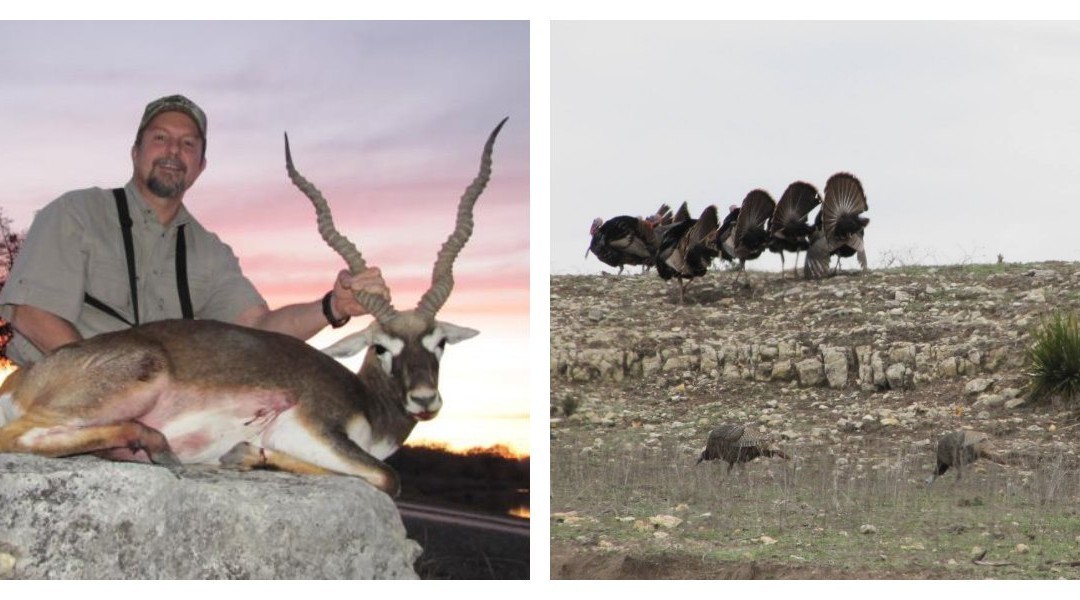 Last week I was back at the Shonto for some exotic hunting in Texas.  I met Bill at the Dallas Safari Club show back in January, he mentioned that he was interested in a blackbuck hunt and after a few emails and phone calls we were able to arrange a date and head to the Shonto.

Exotic Hunting in Texas – Blackbuck Hunt at the Shonto Ranch

He arrived Wednesday afternoon and after getting settled in we headed to the rifle range to check his rifle just to make sure it was still zeroed.  One shot was all we needed to check his zero and then we headed into the field.  Hunting safari style allowed us to cover a lot of the ranch and see a lot of mature blackbuck.  In the course of the afternoon we easily saw 100 blackbuck, 100 axis deer (most are still in velvet, but we are going to have some HU 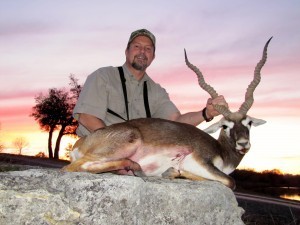 GE axis in another 45-60 days!), oryx, fallow, sika, whitetail, turkey, and Texas dall.  After passing on several nice blackbuck, we spotted the one we wanted with about 6 other rams and readied for a shot.  Blackbuck are small animals and this one was grazing on some new growth about 300 yards away.  Not a very big target at that distance!

After a few tense moments, the blackbuck finally settled down and the big one we were after stepped clear and Bill took his shot and he connected with a big 20″ blackbuck ram!

After getting the blackbuck in the cooler we headed to the pavilion for dinner.  We have 4 miles of Turtle Creek running through the ranch and the pavilion sits on the bank of the creek and is a wonderful setting for dinner, swimming, fishing, and just relaxing and enjoying the beauty of the Texas Hill Country. Throw in ribeyes and sweet potatoes, and it just doesn’t get much better. Just one of the few perks of exotic hunting in Texas!

Bill wanted to take home some meat, so the next morning we were back at it looking for some does to fill his freezer.  Being a Level 3 Managed Land Deer Permit ranch we are able to shoot whitetail until February 29th and Bill helped us with our management program and harvested a couple of big whitetail does.

Not quite so exotic Hunting in Texas – Turkey invasion!

While we were out we ran into some turkeys strutting and gobbling. 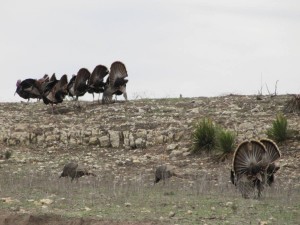 Spring turkey season isn’t far away and it looks like the birds are going to really be putting on a show for us on opening weekend.  I can’t wait!

We got Bill’s blackbuck and whitetail does loaded up and he was off to his ranch to spend the weekend with his family.

It was a short hunt, but a lot of fun and very successful.  I really appreciate Bill giving me the opportunity to take him exotic hunting in Texas on the Shonto.  With all of the rain we have been getting lately it’s shaping up to be an awesome spring and I can’t wait to get back!