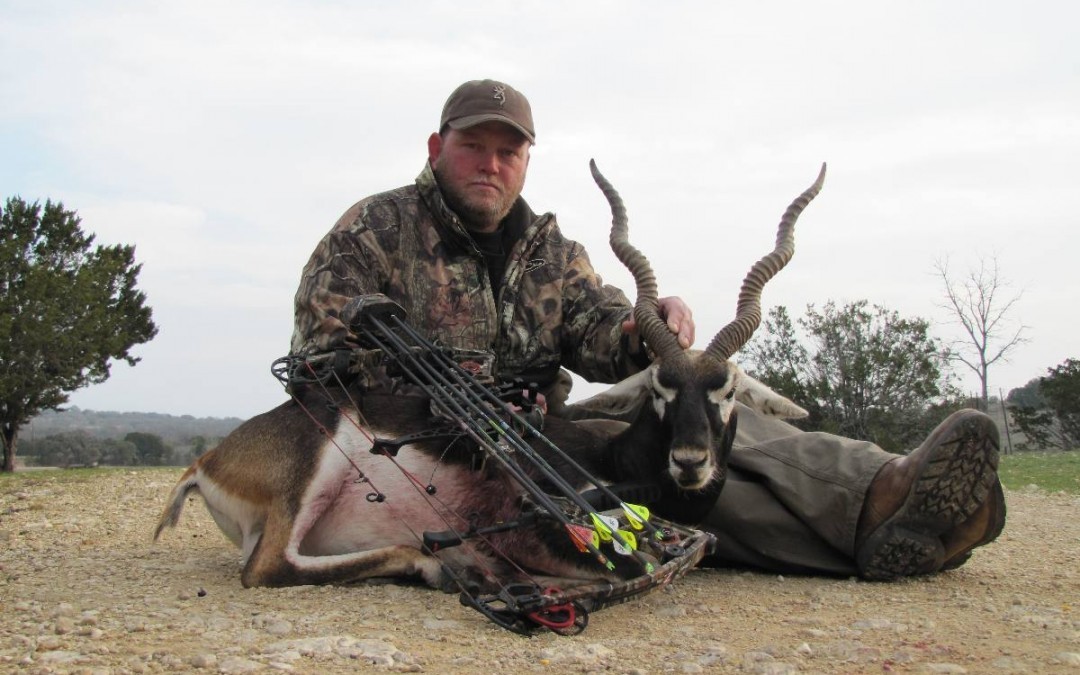 Last week we had 3 brothers from Louisiana come to the Shonto for some exotic hunts in Texas.  We were after blackbuck, sika, scimitar-horned oryx, and maybe an axis if we found one that was close enough to being done growing it’s antlers (axis are typically hard horned from late March to July or August).  Bow hunting exotics can be quite a challenge, but if there’s any ranch where you can expect to harvest an exotic with a bow, it’s the Shonto.

Exotic Hunts in Texas – No luck on day 1

Tuesday morning as we headed out to several of the permanent bow stands on the ranch we were seeing quite a few animals in the headlights, and spirits were high.  We all saw some nice animals, but being the first morning none of the brothers decided to shoot.  Several blackbuck presented Jake, my hunter for the morning, shot opportunities, but he elected to pass and get a feel for what size of trophy to expect.  We were about to wrap up the hunt when a monster axis started heading our way and Jake immediately changed his mind from shooting a blackbuck to wanting this axis.  He wasn’t quite finished growing his antlers, but Jake wanted a big axis in velvet and we had one headed our direction.  Unfortunately, something spooked the big axis and that was the end of our hunt.  From that moment on, all Jake could talk about was the big velvet buck and that’s what we focused our attention on for him.

Exotic Hunts in Texas – is day 2 going to be better?

Tuesday evening saw Jake and I back in the same stand that we hunted that morning looking for the big velvet axis, but no luck.  We saw quite a few blackbuck and a really big sika, but he just couldn’t get the big velvet axis out of his head.  His brother, John, had a bunch of axis come in to his bow stand but he was looking for a nice blackbuck and his other brother, Wesley, connected on a nice blackbuck.  The ice had been broken!

Since John had seen a bunch of axis and Jake and I saw a bunch of blackbuck, Wednesday morning we decided to swap blinds and I took John with me to the stand where we had seen the blackbuck and Jake went over to the stand John had been hunting hoping the big velvet axis would show up.  Jake had about 25 axis come in to his bow stand, but not the big one.  John and I had blackbuck all around us and it didn’t take long for him to connect on a real nice one.

Exotic Hunts in Texas – day 3 is the charm!

John’s blackbuck with his bow!!

Wednesday evening saw Jake back in the same stand he hunted that morning, Wesley moved to another stand across the ranch in search of the scimitar-horned oryx and John and I were trying to find him a blackbuck, fallow or sika doe.

The oryx didn’t come in for Wesley, but some nice axis did and he quickly called an audible and connected on a nice axis in velvet! 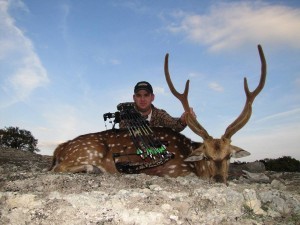 All of our efforts were now focused on finding the big velvet axis for Jake.  He saw more axis on Wednesday evening at his bow stand, but not the one he was looking for.  We only had 1 day left on their hunt.

With Thursday being their last day to hunt, Jake decided to put the bow down and break out the rifle.  This axis was huge and he really wanted to take him back to Louisiana.  We got on the big axis 2 times Thursday morning, but both times he ducked in the brush in a hurry and we were never able to get a shot on him.  We hunted hard, but it just wasn’t meant to be…..unfortunately.

Once again we had a great time and successful exotic hunts in Texas at the Shonto and had 3 animals in 3 days and they were all bow kills!  Pretty impressive in my opinion.  I really want to thank Wesley, John, and Jake for the great time.  I really enjoyed getting to know them and getting to hunt with them.

It’s no easy feat getting on trophy blackbuck and axis with a bow, but like I mentioned at the beginning of this blog, if you want to try and bow hunt exotics there’s no better place than the Shonto!! Contact me now, if you want to try some Exotic hunts in Texas and shoot your own, Axis Deer, blackbuck, or oryx.