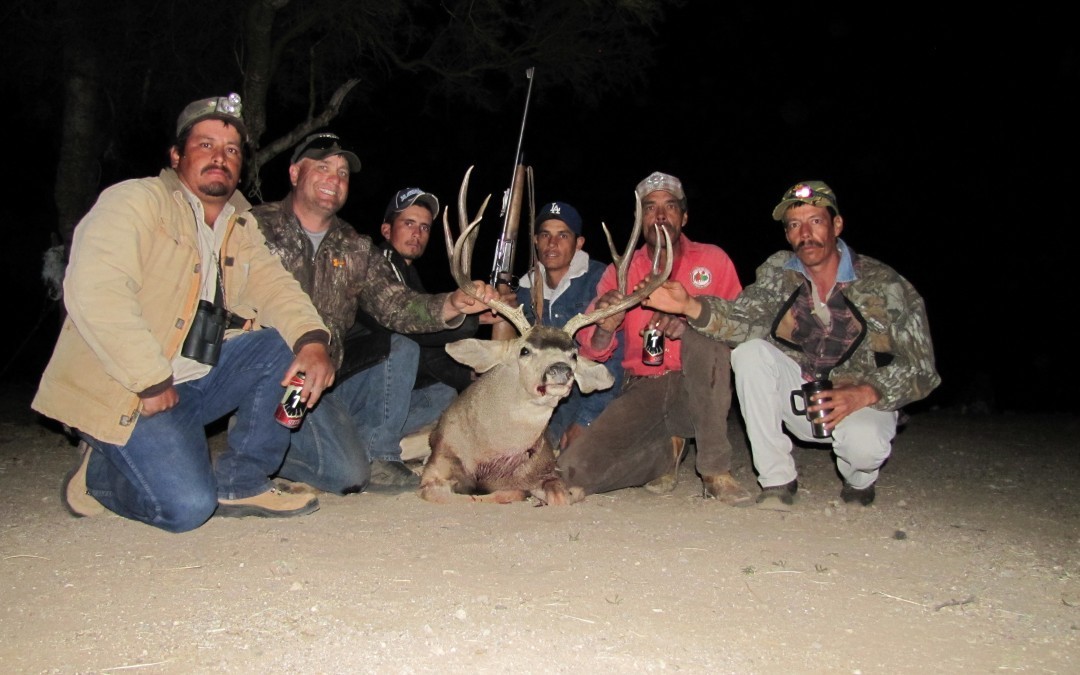 I’ve debated since I got back from Mexico about writing this, but in the end I decided it best to let as many people know as possible so that others won’t have to go through what my hunters and I had to go through in Mexico.

For as long as I can remember I wanted to go to Hermosillo, Sonora and hunt the giant desert mule deer I had seen pictures of so when I met Lorenzo Tadeo Leon about 6 years ago I felt like I had finally made a contact in Hermosillo that I could possibly end up hunting with in Hermosillo one day.  I sent several hunters to him over the course of 6 years and had good reports back and over the years began to feel more and more comfortable with him and going to hunt in Hermosillo.  I finally booked a hunt for myself and my 2 hunters, Roger and Kenny, for January 9-17, 2012.

Sunday night, January 8th, Lorenzo Tadeo Leon called and said his truck was stolen and inside his truck he had the generator for our mule deer camp, the 2 rifles my hunters were to use, and the gun permits for my rifle as well as numerous other hunters that were to hunt with Lorenzo Tadeo Leon.  It was the night before we were to fly into Hermosillo but Lorenzo Tadeo Leon assured me that he could get rifles for us and that everything would be fine and that we should still come to Hermosillo.  I was a little hesitant, but he sounded confident that he could get us rifles, so we went ahead and flew into Hermosillo.  Lorenzo Tadeo Leon met us at the airport and took us North of Hermosillo to our mule deer camp and when we pulled up to the gate I noticed a Camou Brothers sign on the gate, and knowing their reputation, knew that we were hunting a ranch that had been over-hunted.  As we pulled up to camp I could tell by the look on Lorenzo’s face that he hadn’t been to the house like he said.  2/3 of the windows were missing, a door was missing, we had no hot water, and all of the copper in the conduits had been pulled out.  Before Lorenzo left that evening he said he was going to pick up his coues deer hunters and take them to their camp and come back to our camp the next afternoon and that his buddy, Marco, would be at our gate at 8am the next morning with 3 rifles.  That was the last time I heard from or talked with Lorenzo Tadeo Leon.  He still won’t answer/return my calls.

The next morning we woke up and were waiting on Marco, but he never showed and we were stuck in camp with no rifles.  That afternoon the owner of the ranch showed up with about 4 Mexicans, all the glass for the windows for our house, a generator, water heater, all the copper wiring, and the door that was missing.  It took them 2 days to get the house back in order, and in the process all of the guys working on our house ate the majority of our food and drank the majority of our drinks.  Being bored sitting in camp without rifles, and working in construction the majority of my life, I started to help the guys fix the house.  Luckily I can speak pretty good ranch Spanish and during the rebuild of our house I came across a guy that had 3 rifles and he agreed to bring the rifles to us the next day.  After sitting in camp for 2.5 days without rifles a guy showed up with 3 rifles and we could finally hunt.  We were out of food, drinks, gas for the generator, but at least we were hunting.  The only problem was that Lorenzo Tadeo Leon hadn’t paid the majority of the landowners, so we could only hunt about 6-8,000 acres of the 80,000 acres he promised we would be hunting.

On top of paying for the hunt, the gringos were now paying to rent rifles, gas for the generator and trucks, food, and drinks, but like I said, at least we were hunting.  Both of my hunters shot mule deer, but both of the 1st desert mule deer their guides told them to shoot were very small (115-125″) desert mule deer and were very bad calls by the guide.  In both instances the guide told them it was their fault and it wouldn’t count against them and they could keep hunting.  The second buck that Kenny killed was a better desert mule deer, but it still only scored 150″.

With 1 day left to hunt, Lorenzo Tadeo Leon must have called someone in our camp because the guys took the high rack off 1 of our trucks and drove off with our truck that night and left us with only 1 vehicle for 3 hunters.  Come to find out, Lorenzo Tadeo Leon needed his truck to get the coues deer hunters back to the airport.  Luckily we still had the 1 truck because we needed it to get back to the Hermosillo airport.  Without that truck we would have been stranded in the Sonoran desert and missed our return flights home because Lorenzo Tadeo Leon never came back to our camp to pick us up.  Lorenzo Tadeo Leon also had the tags for our desert mule deer and since he never showed back up, all the desert mule deer we shot had to be left in Mexico.

I’ve spent enough time in Mexico to understand how they do business down there and how the majority of them learned from the “school of manana”.  I knew enough not to expect for things to go 100% perfect or like you would expect a hunt to go here in the USA, but there’s no excuse for the way Lorenzo Tadeo Leon abandon us and never called to explain things to us or to try and help us out.  If I hadn’t been able to speak a good amount of ranch Spanish we would have been totally screwed and would have spent 7 days in camp with no rifle and it would have been a much worse situation than it was.  As it were, we made the best of a horrible situation, but it was still a very bad experience.  Short of someone getting thrown in jail or dying, it couldn’t have been any worse.

I’ve called Lorenzo Tadeo Leon numerous times and he still won’t return my calls.  I would just like to hear his side of the story, but at this point I’ve given up hearing from him and have decided to pursue other methods to make this horrible experience right with my hunters.

I’ve repeated Lorenzo Tadeo Leon’s full name numerous times so that you will never forget it as well as to get it to rank as high as possible in the search engines and help as many hunters as possible from having the same experience we did.  His home number is 011 52 1 662 284 4347 and his cell number (as of the writing of this blog) is 011 52 1 662 204 8504.  These numbers are very important in identifying him as like many outfitters in Mexico he doesn’t have a business name or an outfitter number.