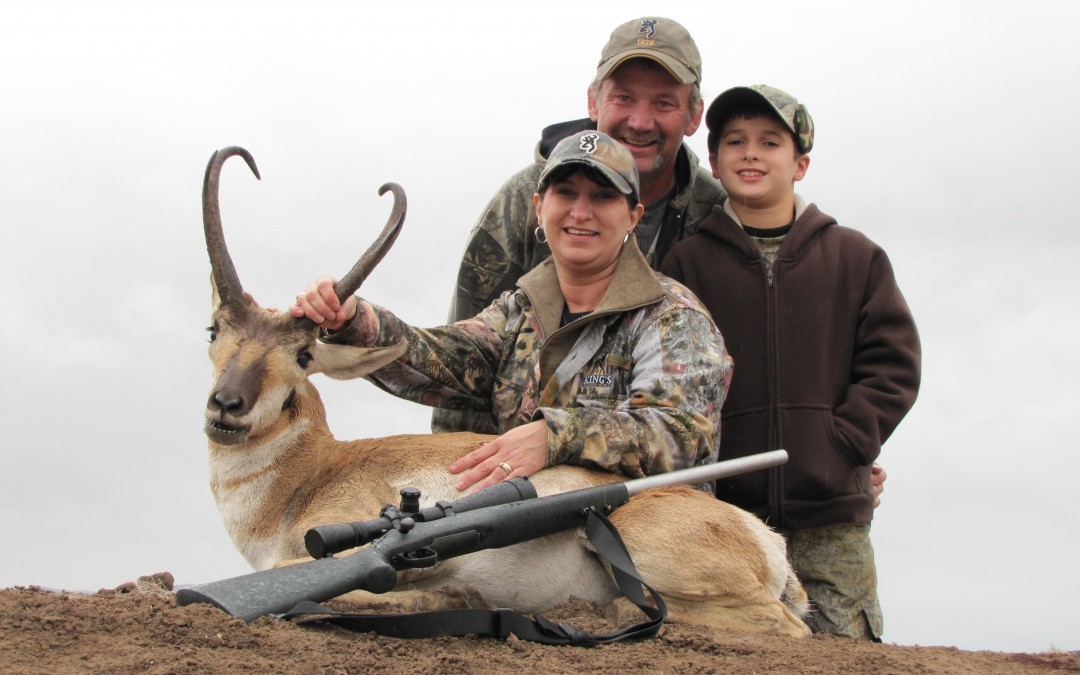 I wrapped up Pronghorn season Texas with 3 successful hunts.  The biggest Pronghorn we killed was 14-7/8″ and scored just over 70″.  That’s a pretty nice Pronghorn for where we hunt and it was Barbara’s 1st Pronghorn, so she was very excited.

The 1st few days of this year’s pronghorn season Texas were cool, overcast, and rainy but after the 1st weekend it cleared up and we had great weather.  It was definitely a nice change having the cooler weather, though.  The sun can get pretty intense at that elevation, so being overcast was pretty nice.  West TX has been getting quite a lot of rain, so the grass was pretty tall and that made it a little difficult to spot the Pronghorn unless they were up and moving.  When they laid down, they pretty much disappeared.

Unfortunately West TX, mainly the region around Marfa, has been experiencing a drop in Pronghorn.  The ranch we hunt still has good numbers of Pronghorn and some really nice bucks, but it’s still a little concerning.  Most of the ranchers in the area, ourselves included, are participating in a study in conjunction with the TPWD to try and find out the cause of the decline in Pronghorn populations in the area.  We collected several samples for the study and they said they got some pretty good data, so hopefully  they will find out what’s going on and help the numbers of Pronghorn rebound.  I know it’s been pretty dry and hot during July when the babies are normally being born, so hopefully they will get some rain and cooler weather and that will help as well.

We also saw quite a few Aoudad.  We saw 1 really big Aoudad, about 31″, with a broken right horn.  I would imagine his bases were about 13″, so I would love to see the Aoudad that hit him hard enough to break his horn.  I got pretty close to a herd of about 40 and got some pretty good pictures.  I love hunting Aoudad and spent a couple of days in the mountains looking for them.  We got close enough for several shots, but none of the hunters I had with me when I saw them wanted to shoot an Aoudad.  That’s normally how it works.  When you are hunting them they are hard to find, and when you don’t really need to find them they walk out right in front of you.  It was still fun though, and with my camera I shot all of them several time and didn’t have to clean a thing.

I just got back and will start hunting a mid 170″ whitetail with a drop time, but I can’t wait to get back out to West TX next season and hunt Aoudad and Pronghorn.  We may not have as many Pronghorn permits next season, but I’m sure we will have some.  If you are interested in hunting Aoudad or Pronghorn, just give me a call (210-602-3118) or email me at wes@hdd-test.mystagingwebsite.com.  We’ll have a blast!!

I’ll keep you posted on the whitetail hunt.  This is a big deer and we will be bowhunting, so cross your fingers.  I tried to update the blog via my phone, but couldn’t figure it out but I’ll try again on this next hunt.