Texas Hunts in the Summer 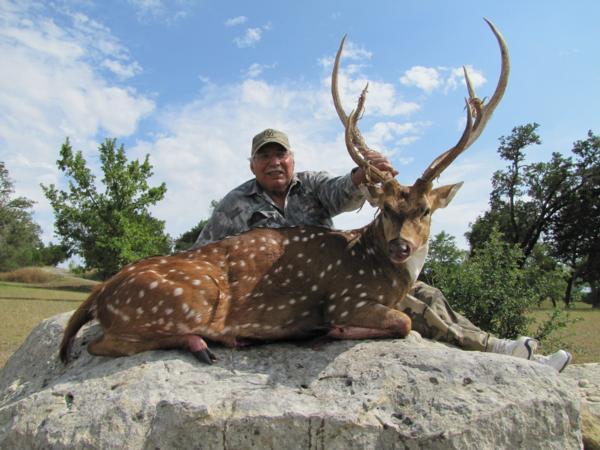 Texas Hunts in the Summer

Texas Hunts in the summer are hot. So if you want to hunt big axis in Texas you have to deal with some Texas heat, but it’s well worth it!  Rudy, Joe and Bill wanted to add an axis, and possibly a blackbuck, to their trophy collections so they loaded up and headed east from California for some good Texas hunts in the summer heat.  We met up at the Shonto Ranch and with everyone excited to start hunting it didn’t take us long to get everyone situated in their rooms and rifles sighted in at the range. 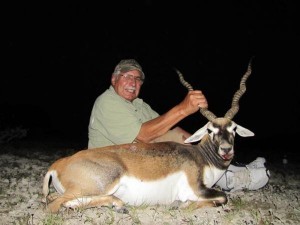 It didn’t take us long to locate some nice axis, but with it being so early in the hunt we decided to keep looking and let the guys get a little better idea of quality of animals on the Shonto.  That was until we located a big axis, just coming out of velvet, laying in the shade of some oaks with several does and a couple of younger bucks.  Rudy was ready for a shot but when the buck stood up he was facing us and never turned for a broadside shot and eventually ran off.

With the afternoon sun setting we continued on our hunt and right as light was fading we got on 2 really nice blackbuck.  Rudy located the bigger of the 2 in his scope and connected with a great blackbuck. 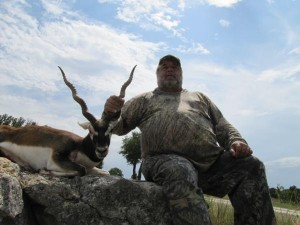 After seeing Rudy’s blackbuck, Joe decided he would like to try and get one as well, so we were back in the field bright and early the next morning.  We located a great blackbuck fairly quickly, but we couldn’t get any closer than about 285 yards and on a 90 pound animal that’s a pretty long shot.  Joe steadied the cross hairs, squeezed the trigger and the blackbuck dropped!

Texas hunts in August can be hot, but we got lucky and had cloud cover late into the morning, but we just couldn’t quite locate any of the larger axis and decided to take a break for lunch and let it start to cool off a little before we headed back out for the afternoon hunt.  Heading back out that afternoon I really wanted to try and locate the big axis just coming out of velvet that we had seen the previous afternoon.  I knew looking for 1 specific animal would be tough, but he was a great axis and well worth the effort. 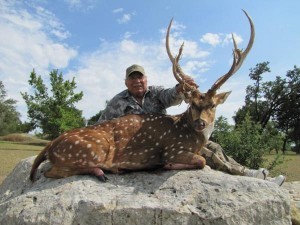 It took a few hours, and almost having to take Rudy’s bullets away from him, but when we finally located the big axis from the previous afternoon it didn’t take long for Rudy to get him on the ground.

Typical Texas summer weather greeted us the next morning and it didn’t take long to start warming up.  As the temperature climbed the animals headed back to the shade to bed down and the hunting started to really slow down.  With most of the animals beded down we decided to call it quits and head back to the lodge and get out of the heat ourselves.  I had been seeing a nice axis buck with real dark chocolate horns a little later in the mornings and on a whim decided to drive through that area on the way back to the lodge.  It was a long shot, but you can’t kill anything sitting in the lodge so off we went. 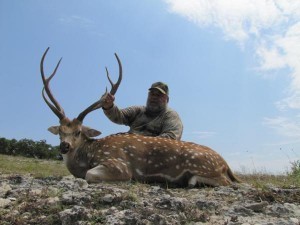 Luckily the axis rut was in full swing and the big chocolate horned axis buck was less concerned with the Texas sun than the hot doe he had all to himself.  With the big old axis buck concentrating on his doe we were able to get inside of 200 yards and that was all Joe needed.

Now that we had a blackbuck and axis for both Rudy and Joe it was Bill’s turn.  With the afternoon cloud cover I didn’t think it would be long before we got on some great animals.  Boy was I wrong.  I thought we were going to get skunked that afternoon, but with about 30 minutes of light left we located a herd of axis moving out of the trees and hurried to get into position for a shot.

It took a little creative maneuvering to get into position, but once in position Bill didn’t have any trouble connecting with this nice axis buck. 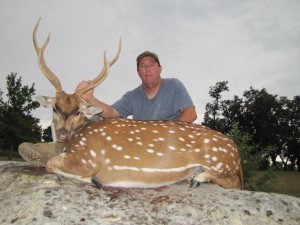 Texas Hunts – And another Blackbuck

It was about time for the boys to head home, but after seeing Joe and Rudy’s blackbuck, Bill thought he would like to try and take one back to Cali with him as well.  Wanting to get on the road about mid-morning I knew we didn’t have much time and I was really wondering about our chances.  I knew we had seen some great blackbucks over the previous few days and was headed in their direction. 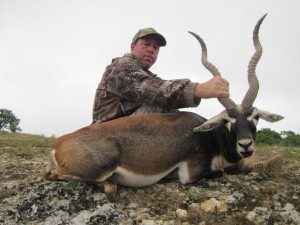 It was a great way to wrap up an awesome.  Joe, Rudy and Bill all took some great axis and blackbuck back to California. I really had a great time hunting with these guys and really appreciate them making the drive to Texas and spending a few days with me.

Texas hunts in the summers can get pretty hot, but if you can bear the heat the hunting is even hotter!

If you are ready to handle the heat and are looking for a beautiful axis deer or blackbuck to add to your trophy collection, click on “Book a Hunt” and fill out the form. I’ll get in tough with you within 24 hours and we can discuss the details!