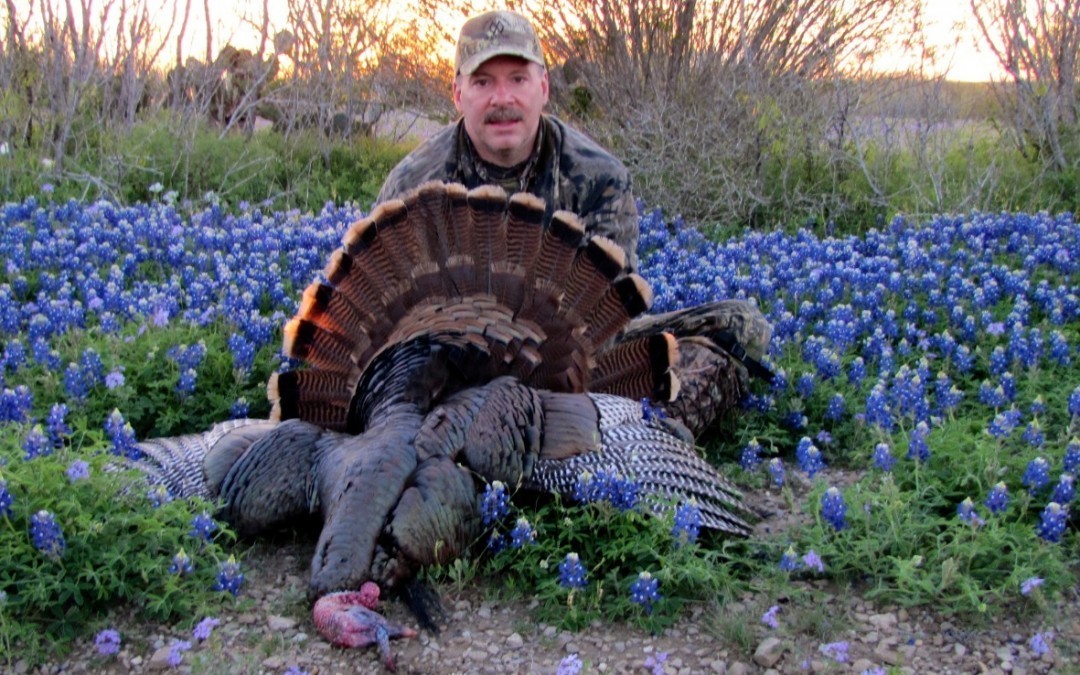 March 20th was opening day of Texas Turkey Season and I had the pleasure of having DJ come down from New England for his 1st South Texas Rio Grande Turkey hunt.  Being an avid turkey hunter, DJ has hunted turkey’s all over the country, including the Texas Hill Country, but he had never hunted turkey in South Texas and I was really excited that he gave me the opportunity and joined me between George West and Freer.

Texas Turkey Season – First one down

We got to the ranch Friday afternoon, got our gear unpacked, and headed out to do a little scouting and make a game plan for opening morning of Texas Turkey Season.  The forecast was for a strong front to move through South Texas early Saturday morning and we knew our morning hunt would be cut short so we were trying to be prepared.  Well, we were prepared Saturday morning, but the tom’s were “henned up” and had other ideas.  They were pretty quiet once they flew down from the roost bu 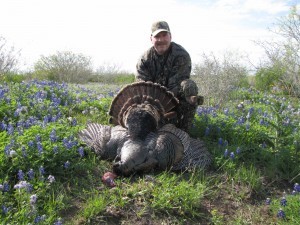 t we had a few gobbling enough to get us further and further away from the truck just to make sure that we would be completely soaked to the bone before stumbling back to the truck. After returning from George West, to dry all our clothes, and eating lunch we headed out to make up for lost time.  With the wind at a steady 25mph, and gusting to over 30mph, we knew we were going to have our work cut out for us.  As we headed back out we spotted a lone tom strutting and headed towards him.  We were able to get within about 70 yards of him, set up the hen decoy and started calling.  After about 20 minutes of gobbling like crazy he sprinted in to our set up, stopped when he saw the hen decoy and DJ made a great shot at about 17 yards.  With all the rain we have been having in Texas there are bluebonnets everywhere so we grabbed DJ’s turkey and went to get some pictures.

Texas Turkey Season – Can we double up in 1 afternoon?

After some great pictures we were off to see if we could double up in 1 afternoon.  We headed back to a location where we had seen several tom’s and about 6 hens the previous afternoon and got lucky and they were there again.  After sneaking, crawling, duck walking, and crawling a little more, we got to within about 80 yards of the turkey’s and began calling.  We called for over an hour, but both tom’s were very content to stay with their hens and could care less about what we were doing.  With the sun fading and the turkey’s not cooperating we were about to pack up the decoys and call it a day when I spotted 2 red heads walking through the brush.  Unfortunately they saw us as well and we thought we were busted.  Luckily they were more concentrated on the hens than us and continued toward us and the decoys.  The only problem was that with the sun fading, the 25mph winds, and having been sitting in the shade for over an hour, both DJ and I were freezing and shaking like crazy.  Once the tom’s saw the decoys though it was all over.  They came to within 25 yards, DJ took a deep breath to help control his shaking, and he once again made a perfect shot.  All the turkey’s scattered but as we were about the get up and collect everything, the other tom came back in and tried to jump on the dead gobbler and show him who’s boss!!!!  It was an awesome way to wrap up and afternoon and an awesome hunt!!!  With daylight fading we hurried to get some good pictures.

The final tally to get Texas Turkey Season started, was: Rio Grande Turkey #1 22 lbs & 10-1/2″ Beard, Rio Grande Turkey #2 19 lbs & 9-1/4″ Beard.  2 great turkey’s, within a couple hours of each other, in those weather conditions, and both on opening day of Texas Turkey Season.?.?  I thought that was pretty awesome and I’m pretty sure DJ did as well!!! 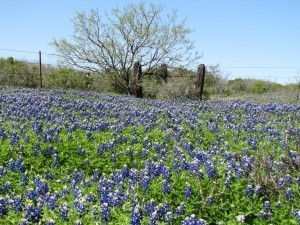 With DJ getting his 2 tom’s we were able to relax a little and on Sunday we decided to take a few pictures of all the wildflowers that were blooming.  2009 saw South Texas in a terrible drought, but in October it started raining and it hasn’t stopped and South Texas is in great shape.  I don’t think I’ve ever seen this many wildflowers in South Texas in over 25+ years.  It’s absolutely beautiful. There are so many bluebonnets in some areas that it looks like water.  It’s impossible to explain and definitely not a very common occurrence, so you have to make the most of it while we have it. Texas Turkey Season at its best – truly!

We had a great time, a great hunt and I really appreciate DJ coming down to hunt with me.  I’ve got Trueman, a 70 year young, 1st time turkey hunter coming down on Sunday afternoon and we will start hunting Monday morning. If you want to see, if he got some toms to take home, click here to read his story! I’m really excited to meet him and can’t wait to get to hunt with him.

If you want to go out with me during Texas Turkey season, check out my Turkey Hunt page or give me a call (210-602-3118) and we discuss everything right away!