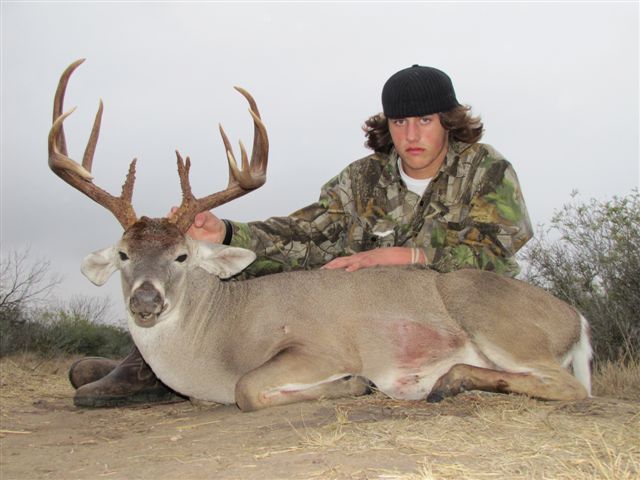 This is my Texas Whitetail Hunts story that is in the current issue of Texas Trophy Hunter magazine.  Pages 10 & 204.  I hope y’all enjoy it.

Like most hunters across South Texas, I anxiously awaited the start of the 2010-2011 whitetail season. Texas Whitetail Hunts are famous and with record rainfall starting at the end of 2009 and continuing into the summer of 2010, range conditions couldn’t have been better for antler growth.  It was going to be an awesome season and being the owner/operator of Double Diamond Outfitters I was going to be fortunate enough to get to spend almost every day of the season going on Texas Whitetail Hunts.

After a short 2-day break for Christmas I was headed back to the Pearl Ranch, 5500 low-fenced acres between George West and Freer, to meet Roger Baber and his 14 year old son Trip and guide their hunt for the next few days.  I was really excited to be hunting between Christmas and New Year because you just never know what you will see when you are hunting the rut in South Texas, especially on a low-fence ranch.

As we started our hunt on the afternoon of December 26th, the weather was cool and overcast with a light north wind, perfect hunting conditions for South Texas.  We were hunting a big 9 point that we had seen several times.  We estimated it would score in the 160s.  The big 9 never showed, but Trip was able to harvest a great management buck and get the hunt off to a good start.  Over the next couple of days we kept hunting the big 9 point, but he never showed himself so we decided to move to a different part of the ranch and see if we could locate some of the other big bucks on the ranch.

With cool, overcast conditions and the rut we decided to go to the blind early Tuesday afternoon.  We loaded my Jeep Scrambler and started the 15 minute drive.  Everything was perfect until we were 150 yards from the stand feeding one of the senderos when I realized I forgot my binoculars.  I couldn’t believe it!  I didn’t have time to drive back and get my binoculars and wasn’t much of a guide without them.  Luckily I remembered we had an extra pair of binoculars at the other house, which was much closer to the blind we were hunting.  While dropping Roger and Trip off at the blind I noticed a couple of does down one of the senderos but didn’t think much of it since we see resident does fairly often in that sendero.  After getting the binoculars I raced back to the blind and noticed Roger waving out one of the windows of the blind.  I thought he was just looking at the does and wasn’t very concerned, but then I noticed the closer I got to the blind the more frantic the waving became.  There had to be something in the sendero, so I got out of my Scrambler, told Brutus (my lacy pup) to stay in the bed of the Scrambler and eased up to the edge of the sendero.  Easing up to the edge of the sendero I saw 1 of the biggest native Texas Whitetail bucks I’ve ever seen.  It was following a couple of yearling does.  He was an absolute monster!  We had to figure out a plan, and fast.  I ran back and turned off my Scrambler, told Brutus to stay one more time and ran back to the sendero.  Belly crawling back into the sendero, I had to get far enough into the sendero to get a good look at the buck and be able to age/score him, not get seen by the does or the buck, and hopefully be close enough to communicate with Roger and Trip.

The buck was quickly closing the distance to us as he pushed the yearling does down the sendero, but he wouldn’t turn broadside so I could age him.  I had him rough-scored at 167” and knew a buck that big had to be 6.5+ years old before we would shoot him.  As he closed to within 100 yards I was finally able to age him at 6.5-7.5 years old and knew we had to take this buck and quickly.  With the buck inside 100 yards and the does at about 80-90 yards, I was trying to hand signal to Roger what I thought the deer scored and that he was old enough but we were having some communication issues.  As the buck approached another sendero, which lead to the feeder, we finally were able to work out the communication and I heard Trip flick the safety off on his rifle.  When the buck turned to step back towards the does he paused just long enough for Trip to fire.  Unfortunately, having quickly acquired a bad case of buck fever, Trip shot over the buck.  Luckily the buck wasn’t sure where the shot came from and ran closer to us, across to the other side of the sendero and stopped to look back to see what happened.  That was all the time Trip needed for a second shot; this time he found his mark.

The buck was hit, but he didn’t drop and ran into the brush.  It looked and sounded like a good hit, but until we recovered the buck we were all pretty nervous.  Luckily we had Brutus and he had stayed in the back of the Scrambler while all of this was going on.  Roger and Trip came down from the blind as I was putting the GPS collar on Brutus.  We gave the buck a few minutes to expire, and then we were off to hopefully recover him.  We found where the buck was standing when Trip shot him and we quickly got Brutus on the blood trail.  It didn’t take him long to find the buck and once we caught up to Brutus and got our hands on the buck we all breathed a sigh of relief.

This buck was a monster 12 point and there was no ground shrinkage, in fact just the opposite.  This buck got bigger the more we looked at him.  I scored him for the Texas Big Game Awards and he gross scored 171-4/8” and was 7.5 years old!!!  Now that’s what you come to South Texas for – Texas Whitetail Hunts!!!

If you want to go on your own Texas Whitetail Hunt with me, fill out this form and I will get in touch with you in the next 24 hours to discuss the details!