Whitetail Deer Hunting Season Off To A Good Start 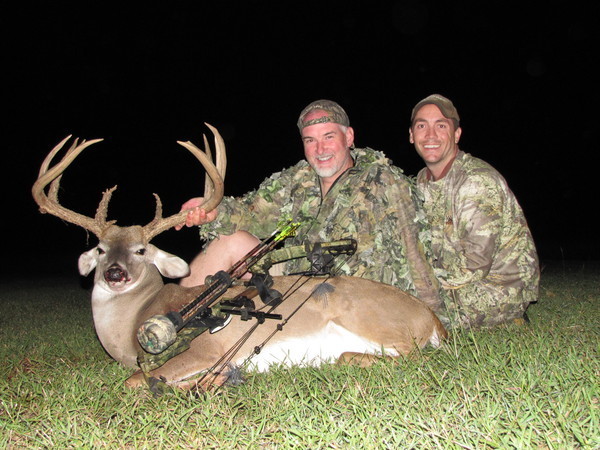 Whitetail Deer Hunting Season Off To A Good Start!

After wrapping up pronghorn season it was time to start whitetail deer hunting season.  In Texas, a good protion of the ranches have Managed Land Deer Permits (MLDP or MLD for short) which allow us to start rifle hunting at the beginning of October, giving them a good head start on Whitetail Deer Hunting Season.  With a lot of the ranches starting whitetail deer hunting season the week I was hunting pronghorn, I knew there were some really big deer killed already.  My buddy, James Newport, shot a monster whitetail with his bow opening day that grossed 202″ and will net right around 196″.  That’s a net Boone and Crockett Non-Typical with a bow!!!  On that same ranch on the same hunt, another hunter shot a whitetail that grossed 230″ non-typical!!! Two book non-typical deer, during the worst drought in recorded history, on the same ranch on the same day!! Very impressive!! 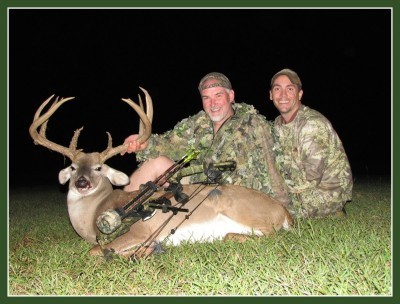 Mike was coming in from NC and for the last year we had been planning on bowhunting a big deer during the early part of whitetail deer hunting season in Texas.  We finally decided on hunting the second week of October and we were targeting a mid to high 170s” buck with a droptine.  I was a little nervous that this buck was going to break his droptine when rubbing off his velvet, but he was still going to be a monster buck either way.  The first couple of days were pretty slow with Mike only harvesting a couple of hogs, but we had some very close calls with a couple of other bucks that were on our hit list.  The 3rd morning we broke the ice with Mike harvesting a 132″ management buck and that’s all it took.  As the light was fading fast, the big whitetail we were hunting stepped into view from the ground blind’s window.  After a couple of very nervous minutes, the big deer finally presented a quartering away shot but he was walking a wouldn’t stop.  We grunted at the big deer and he stopped for just a couple of seconds, but that was all the time Mike needed.  Mike made a great quartering away shot and the buck only ran about 40 yards. When I saw his antlers sticking above the grass I knew we really had killed a monster.  After hunting the next morning, and Mike missing another management deer on our hit list with his recurve, I took the buck to Pearsall to be entered into the Los Cazadores Deer Contest.  They scored the buck at 179″ w/o the 4-5″ droptine he had broken off!! We hunted for another 1.5 days and Mike connected with 2 more deer and another hog.